Posted on October 8, 2011 by alisaacarter 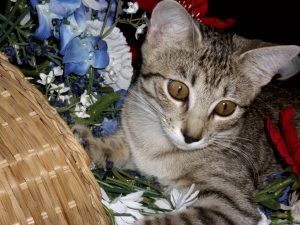 This truly is a terrible cat. I can’t keep silk flower arrangements around anymore, as you can see. I don’t know why she likes to tear them apart and lie amongst the fake blooms. She also tries to eat them. Real plants fare no better. She has also taken to stealing Q-tips out of the trash can. She’ll walk by you with one hanging out her mouth like she’s smoking a cigar. The worst thing is, she’s obsessed with crickets. Crickets have invaded my basement, and no matter where they hide, she sniffs them out, drags them into the light and eats them. She has also turned into a begger. She has tagged me as The Person Who Cooks, so if I approach the kitchen, even for a cup of tea, she runs in behind me, sits on my foot, wraps her arms 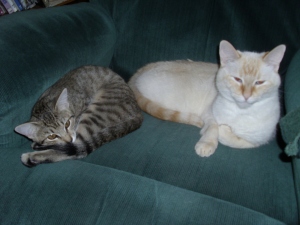 around my calf, and cries until I give her something. And she’s picky! She loves pasta with alfredo, but not red sauce. Loves chicken and fish; won’t eat pork or beef.

Poor Boo – She can jump really high, so he can’t escape her anymore. Except for the top of the TV cabinet; she tried, splatted into the TV screen, and dropped like a rock. She chases him constantly. But he’s definitely starting to like her. He kept searching the house while she was off getting spayed. Thank God, she’s no longer biting Keas and Princess on the butt while they’re sleeping. They’re just no fun. They hiss and claw and stalk off mad. Boo is too much a gentleman — he basically gets smacked around by all the girl cats. I keep his food on the table (the girl cats are too fat to jump up there), because otherwise they 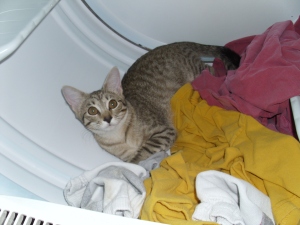 push him off the dish. In his mind he’s mated to Princess and is generally offended by Keas. She’s just so awkward — no respect for personal space. She gets right in his face, sniffs his mouth to see what he’s been eating, licks crumbs off his face. I wish he was “mated” (as best he can) to Keas — at least she’s nice to him. What’s really frightening is that the kitten is trying to make the girl cats submit already. I can just imagine the cat fights to come.

Cleo continues her attraction to feet. When I’m wearing big fuzzy socks, she climbs aboard like my foot is a horse and starts biting. Once she jumped on Keas’ 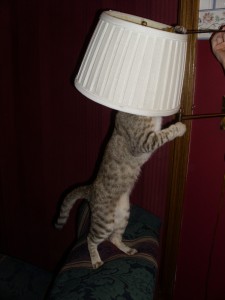 back and rode her a couple of steps, clinging like a monkey. And she’s into everything. You can’t turn your back and leave open a cabinet, the fridge, the dryer. She’ll be in there in a flash. She also climbs the window screens. She just a bad cat.

She has an unreasonable hatred for our white squirrel. We have a family of squirrels in our wild walnut trees out back, and every summer we have an albino squirrel. Cleo is consumed with hatred for the poor thing. She just watches the brown squirrels with mild interest, but if she sees the white squirrel, she will run at the door, hit the screen, and bounce o 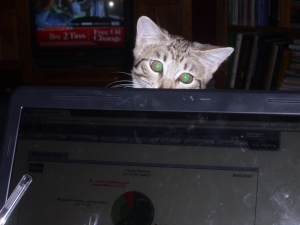 ff, all the while making this sound that is somewhere between a growl and a squeaky door. She’s so little, I honestly think the squirrel could kick her butt. But he’d probably take one look into her psycho white-squirrel hating eyes and run. Along with all the crickets.

I am a writer of young adult novels, wife, mom of three, lover of animals, former magazine editor, reader of anything paranormal, and coffee fanatic.
View all posts by alisaacarter →
This entry was posted in My weird cats. Bookmark the permalink.